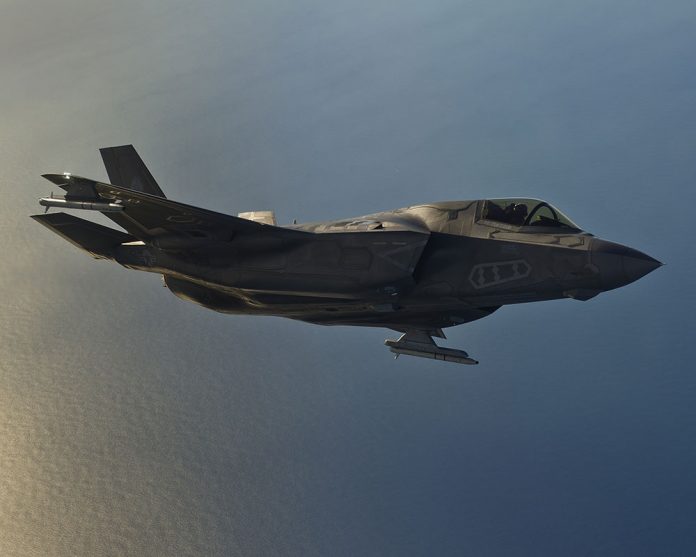 The first of the UK’s F-35 Lightning aircraft have landed at RAF Marham and been welcomed by our business which has played a central role in its arrival.

The first of the UK’s F-35b Lightning aircraft landed on 6 June at RAF Marham. Amongst others, they were welcomed by representatives from our business, which has played a central role as a major contributor on the programme.

The four jets arrived at the RAF station in Norfolk, UK, following a journey from Marine Corps Air Station Beaufort, South Carolina, USA. They were piloted by members of 617 Squadron, the UK’s first frontline F-35 squadron, and were greeted by the Secretary of State for Defence, Gavin Williamson MP, the Chief of the Air Staff, First Sea Lord, industry representatives and members of the armed forces and their families.

The arrival was a particularly proud moment for the UK teams that have played an important role in the aircraft programme, including those that helped develop a number of its systems and equipment, including flight controls, as well as our advanced manufacturing team in Samlesbury, Lancashire, which produces the rear section of every F-35.

It also marked another important milestone for our entire global BAE Systems F-35 team, including our US-based workforce that delivers the electronic warfare technology behind the jet, and our team in Australia that plays a role in the airframe production.

Chris Boardman, Managing Director, BAE Systems Air, who was part of the group which welcomed the jets, said: “The arrival of the UK’s first F-35 Lightning jets marks the latest milestone on a journey that we have been part of since the earliest days of the aircraft.
“From development to production and through to its entry into service as part of a worldwide fleet, our global F-35 team has made its mark right across the programme.
“Together with our industry partners, we are very proud to be a part of this momentous day for the UK.”

The German Ministry of Defence (MoD) announced on 6 April that funding has been approved for the arming of the Heron TP drones operated by...
Advertisment
876FansLike
1,232FollowersFollow
Advertisment

Elbit Systems to deliver night vision goggles to US Marines

US Army equips Strykers with Javelin

Elbit Systems to deliver night vision goggles to US Marines

US Army equips Strykers with Javelin