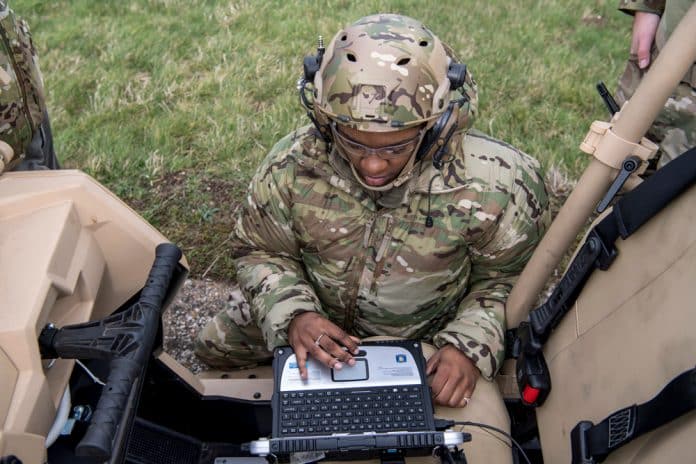 Military operations, in line with the connectivity developments in the outside world, have become increasingly connected. Operations are underpinned by a robust digital backbone that provides the connectivity that allows military organisations to take a huge step towards Total Asset Readiness, tying together the thousands of data steps and processes to provide information for military operators to keep updated on the status, whereabouts and availability of equipment and personnel — uninterrupted and in real time.

But many such operations are, from a tactical and strategic planning point of view, becoming more widely distributed than ever before. We can see this in business. Gartner listed ‘anywhere operations’ as one of its top strategic technology trends for 2021, defined as “an IT operating model designed to support customers everywhere, enable employees everywhere and manage the deployment of business services across distributed infrastructures.”

For the military, any connectivity interruption puts immediate pressure on their digital backbone, stretching it to near breaking point. At the critical moment of service, when a commander is planning a mission to deploy key assets, that person needs to have a totally accurate representation of the equipment at their disposal. Failure at this crucial moment could compromise mission success and potentially endanger military personnel. It’s these periods of non-connectivity that the spotlight is now on.

A recent study from RAND Corporation, an American non-profit global policy think tank created by the Douglas Aircraft Company to offer research and analysis to the United States Armed Forces, illustrates this perfectly in the context of the Air Force. The study focuses on a set of emerging concepts for ‘distributed operations’ that call for a larger number of airbases to complicate enemy targeting and use a more decentralised command and control approach.

In direct response to increased air and missile threats posed to larger main bases, the study notes that the U.S. Air Force is shifting toward concentrating on conducting missions from smaller forward operating locations or bases (FOBs). In order to maximise visibility, there needs to be consistent connectivity between a main operating centre or base (MOB) and these distributed FOBs. RAND then rightly highlights that any disruption to this connectivity by enemy attack on long-distance communications systems, including satellites and long-distance fibre, can seriously compromise mission success.

There are also planned instances where units will be conducting operations in ‘dark mode’. A small percentage of top-secret military operations will, by their sensitive nature, take place in a disconnected environment, without outside-world connectivity and with a purposely minimised electronic signature. For some military units, planned instances of disconnected operations is part of the normal day-to-day business. Think a navy frigate sailing in the South Pacific where it operates in a disconnected, intermittent, and limited bandwidth mode for much of its detachment unless using satellite.

The key requirement in both of these unplanned and planned disconnected operations scenarios is the ability to aggregate, update and re-sync data back to a MOB as soon as connectivity is re-established—mitigating the impact of any outage.

When units are deployed in limited forward operating environments, it can become challenging to bring full software systems such as those designed for asset maintenance onto the frontline—thankfully most military organisations are able to do that when network connectivity is robust. But any break in connectivity can hinder communications among units (think requests for resupply) and possibly compromise the integrity of databases, maintenance software and decision support systems.

But supporting software is often interrupted when a network goes down. Militaries need the ability to continue operating a network at a moment’s notice, even when all outside connectivity is lost, and then incrementally re-sync information such as engineering & maintenance data, technical records and more. Although this may sound simple, this is a very complex undertaking from a data architecture perspective.

Keeping physical and digital asset readiness information back at base

Let’s take an aircraft as an example. When transferring an aircraft from a MOB to a new forward operating node it is not only the physical asset which is being sent! Its logistics support material needs to move with it, from up-to-date technical records to physical spare parts.

During operations, the aircraft’s systems will probably be connected via internet, radio, satellite internet, VoIP etc. 99% of the time—but it’s the 1% of time it may spend disconnected which opens potential problems in data consistency. Without consistent information on what has taken place in the field, such as maintenance, the MOB or home station cannot gain a single version of the truth on the aircraft’s status and availability—limiting a commander’s ability to make decisions, particularly if they’re making decisions about a mission from the other side of the world.

This scenario of course applies to many military assets, you only have to look at naval equipment, which commonly operates at huge scale and in disconnected environments. This scale is only set to increase, as current U.S. Navy plans highlight a force-level goal for an even more distributed fleet architecture, including 382 to 446 manned ships and 143 to 242 large UVs by 2045.

Data exchange must be a two-way street – pull and push

Flipping the scenario around, there will also be key equipment updates that will be communicated out from an MOB and need to be received by personnel in an FOB. Entire assets come with an allowable baseline configuration, which will be subject to change and updates on a regular basis. In defence operations, the Central Engineering Authority (CEA) creates and maintains the maintenance and equipment baselines, and baselines at autonomous bases must remain as up-to-date as possible.

Continuing the aircraft example, any changes to its allowable configuration or critical technical bulletins must be ‘pushed’ outwards to all operational nodes. Depending on its current status, certain airworthiness updates may directly impact an individual aircraft’s safety and ability to carry out a mission, so they must be accessible for the personnel operating the aircraft on the front line.

To effectively manage disconnected operations, the underlying software infrastructure requires the capability to aggregate, consolidate and store data, while providing physical and software-based hardening against attack. Incremental reconsolidation from supporting software is the most effective way to facilitate a two-way information exchange between an MOB and FOB.

Once an asset returns to connected status, supporting software must sync information both ways, establishing a feedback loop to ensure there is an accurate and up to date single version of the truth down to the individual asset level. The other critical requirements to keep all parties updated when information is resynced are scale, security and user experience.

This is where containerised architecture is key and involves bundling an application together with all of its related configuration files, libraries and dependencies required for it to run in an efficient and bug-free way across different computing environments. Containerisation meets the challenges of scale, rapid deployability and being self-contained as secure, standalone software.

Military operators require purpose-built software to address the unique challenges of operating from remote and austere environments in the following focus areas:

Supporting software should be able to address the core requirement needed to transfer assets between nodes for military operations, including asset transfers (air vehicle and loose inventory), baseline transfers along with the asset, and technical records transfers along with the asset. Workflow management functionality should prepare deployments and imports of assets from MOBs to FOBs and inversely from FOBs to MOBs. When assets are transferred, baseline updates and a portion of their technical records are automatically transferred. Conversely, bases can view the batch number their location is using and request an update from MOB or CEA.

In situations where technical records for an asset are created in multiple internal or external systems, command or central maintenance management requires an aggregated view of an asset’s technical records. A Technical Records Repository (TRR) should enable planners, reliability departments and others to view the full set of historical records for maintenance performed and usage accrued on an aircraft or component. Bases that perform maintenance can keep the central TRR up-to-date by sending technical record updates through the built-in workflow manager feature.

Only when these criteria are met, can military organisations execute disconnected operations safe in the knowledge that commanders, maintenance centres and frontline personnel have a consistent picture of the status of the equipment at their disposal. When the critical moment of service arises to deploy a military asset in a disconnected setting, it’s the underlying software architecture that can be the difference between mission success and failure.

Total Asset Readiness: Coming to terms with the next stage of military transformation – five things not to miss